We all miss somebody these days. Well, many somebodies. One I miss in particular is my friend Heather Neill. But every year about this time there’s a daily dose of Heather’s paintings as she prepares for her show at the Granary Gallery on Martha’s Vineyard. And lo and behold, I made another appearance. I had completely forgotten posing for this one.

To see more of Heather’s work, and to read the stories behind each one, see her blog with its “painter’s notes.” https://heatherneill.com/studio-blog/

You remember Heather Neill – her work appears here every now & then. My closest far-away friend…whom I miss terribly this year.

One of the last times I featured her work here 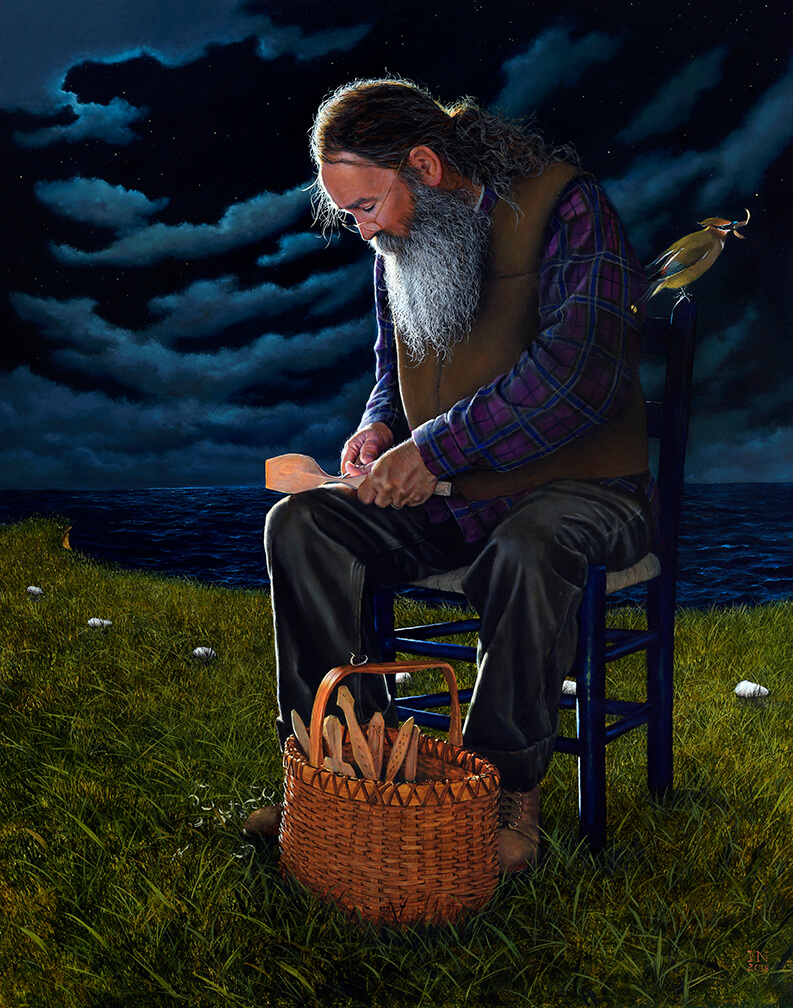 Every summer about this time we take a day-trip to Martha’s Vineyard to visit Heather & Pat who are usually up here then for Heather’s annual showing of her paintings at the Granary Gallery.  But of course, not this summer. The Gallery is open, they’re just not going to be up here for it.

But, if you’ve ever looked at a painting and wanted to know what the artist was thinking, doing, aiming for, etc – Heather’s got you covered. Every year she writes up and posts on her blog the “Painter’s Notes” for each painting. This year she wrote them, but then as a bonus, made & posted videos of her reading them, and you get to see the details you’d get if you were in the gallery.  https://www.youtube.com/channel/UCr5V2NLf6_DnGkNzqH-amHA

As I was getting this blog post ready, I went to Heather’s new youtube channel to get some links, and found the newest video, a sort-of interview with her and her wife Pat – so that’s as good a place as any to start. Then go see the rest. Amazing work, great people.


there’s lots – some are her reading the notes, a couple others tell broader parts of the stories. Some just show us the paintings.

Her blog is here – https://heatherneill.com/studio-blog/

And the Granary Gallery here – (these aren’t the new paintings, I couldn’t find them yet. Maybe soon?) But you can still buy the one of me carving a spoon…  https://granarygallery.com/artist-works.php?artistId=196643&artist=Heather+Neill

Well, not exactly speechless. I’ve been waiting for this day a long time. Many of you have heard me say I have the greatest friends. The woodsy ones lots of you know. But there’s Heather too. She’s a category all her own. Every summer about now, Heather Neill previews her winter’s work before it hits the Granary Gallery on Martha’s Vineyard. https://heatherneill.com/studio-blog/

I have seen many of these paintings as I’ve visited during the past few months – but now you can see them too. And read her kind words about our shared friendship…

Then go back & see the previous two posts, and wait for them to unfold each day. Great great stuff…

Time is flying by. I have lots to do around here. I’m back to work on the shop, shingling the roof with Western red cedar shingles. They don’t call them perfect for nothing – I have to stop myself from pausing to admire the wood in these bundles. But I’ve not shot any photos. You’ve seen people put up shingles before. First batch of windows are slated to go in soon.

Prepping to go to Spoonfest, then right from there to Täljfest at Sätergläntan in Sweden.

In the meantime – it’s July. That means Heather Neill’s show is coming up at the Granary Gallery on Martha’s Vineyard. Here’s a sneak peek – one perhaps called “dark and stormy”

Each painting has a blog post, with the notes about the painting. Worth the time in spades. http://heatherneill.com/studio-blog/

I might not make it to the island this year to see the show – all the more reason to read the blog. I don’t know anybody who puts more of themself into their work than Heather. Unreal. Always a highlight when we get to visit, see you soon HN.

Whoops – posted this & remembered to add the video link:

Visions of Home — The Work of Heather Neill from Barbarella TV on Vimeo.

Everything is relative of course, but for me, I traveled a lot this past year. Had great times in various locations, but one of the best parts is that several trips took me near enough to the Conewago Creek that I/we got to visit with our great friends Heather & Pat. These days Heather is living a dream, working as a full-time artist.  (see web http://www.heatherneill.com/ & blog http://hnartisan.wordpress.com/) – But back when the world was younger, in Cambridge, she learned chairmaking by watching me make a few. She went on to make way more ladderback chairs than I ever did; here’s the kids monkeying around in some of her oldies.

I have often made Alexander-style ladderback chairs for kids in my life, but much like the proverbial shoemaker’s kids, mine have no home-made chairs. I started to fix that not too long ago, and worked on one of them today. This is modern-woodworking for me; a power-bore bit, held in a Stanley universal brace – I even used a pencil today on wood.

It’s been over 8 years I think since I have made one of these chairs.  Jennie still sells the DVD for those who want to take on these chairs. You could also take a class at Country Workshops, which is where I met Alexander & Drew Langsner back in 1980.  I simplify the methods I learned from them;  just because I am only making two of these, and barely have room & time for those. Before we really got entirely involved in joiners’ work, I was working pretty closely with Alexander; but my ladderbacks were always just serviceable, they didn’t really click like many other chairmakers that went through Alexander & Langsner. Thankfully joinery came along with my name on it…

A few quickly-taken shots of the shaving horse. I recently saw some folks saying they need a work surface higher than the “bodger’s horse” – but the one developed by Alexander has a hinged work surface…problem solved.

I’ve been sick this week, so I only lasted a half-day today…so I got one chair partially assembled. Then I inserted a scrap of matboard to test for the slat curvature. It’ll work, but I’m no threat to the modern-chairmakers…

for those inclined, see www.greenwoodworking.com and