Got some photography done the other day…this one’s a joined chest that I have had around a while. I was waiting to hinge it until I could photograph the process. This is the one with the wooden hinges. Here’s the front view

You can see this chest in process during the Lie-Nielsen video I did on making a joined chest.  https://pfollansbee.wordpress.com/2012/11/26/new-dvd-is-back-again-make-an-oak-joined-chest/

First the wooden hinge; then the interior view, with the till. 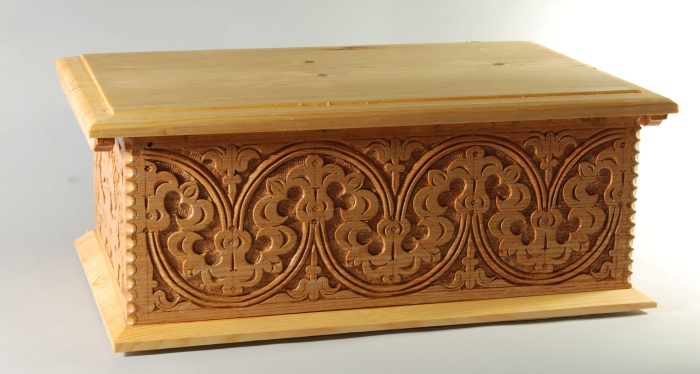 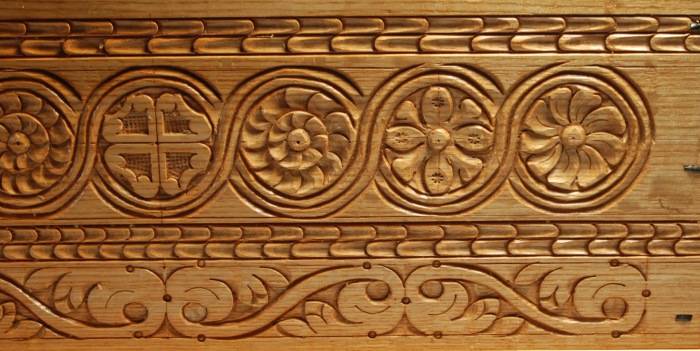 I got an email this morning with the following link in it. An absolutely charming film about furniture & people. Take 8 minutes & watch it. You’ll be glad you did.

If you are tired of hearing me write about Country Workshops, go read another blog right now…last week I heard from Drew Langsner and we were writing back & forth about a few things. He mentioned that 2013 might really be the last summer of guest instructors’ classes at Country Workshops. I knew it was coming; but it’s still a big deal to me…this is where I learned woodworking and so much more. I first traveled to Drew & Louise’s place in 1980, and have been a regular there off and on ever since.

Drew says he will keep teaching his 4-person classes in chairmaking and spoon & bowl carving, and the tool store will keep running. But the full-blown, summer, large group experiences will probably  come to an end. Imagine having between 8 & 12 people, sometimes more, coming to your home 5 or 6 weeks each summer, SINCE 1978! And feeding them, 3x a day…like you wouldn’t believe.

So – if you haven’t been – make some arrangements, shift your schedule, gas up the car. If you have been, time to come back for the semi-last hurrah. Come and take my class. If you folks don’t sign up, I don’t get to go. Or take any of the others. Carl Swensson will knock you out completely in making Swiss cooperage. Carl is one of the best, but little-known, woodworkers in the country. Osamu Shoji will be coming from Japan, for a class in Making a Folding Byobu Room Divider… see the website for all the details. Sign up for the newsletter from Country Workshops…it’s full of good stuff. http://countryworkshops.org/

So will I see you in the mountains?

Here’s pictures, in no particular order 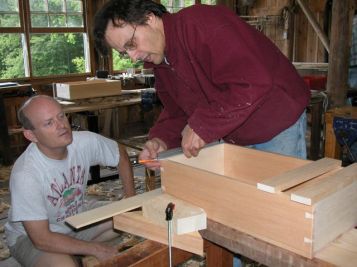 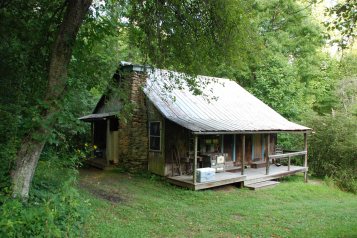 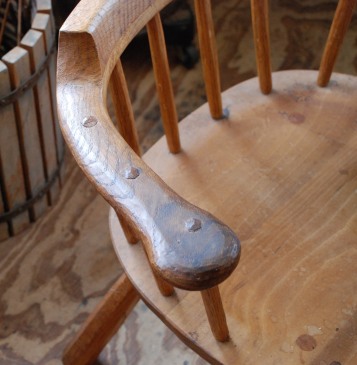 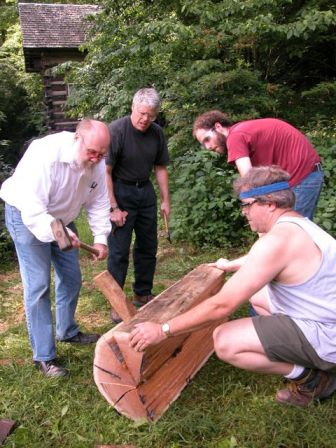 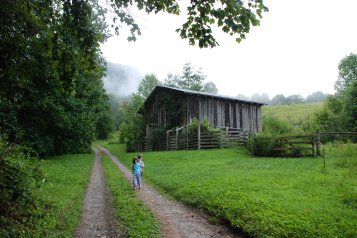 Back to some carving. The riven oak panels I made a month-plus back are in perfect condition now for carving. This pattern is a panel for the chest with drawers I am building. https://pfollansbee.wordpress.com/2012/11/29/a-joiners-life-is-tough/

This style of carving uses no V-tool for outlines. The shapes are all derived from the gouges & chisels. For me, that means it’s slower than using the V-tool. But a distinctive look to it… There is for some the inclination to make a template for a design like this, but clearly the period ones were not done that way; the approximate symmetry indicates that this stuff is freehanded.

Folks who have seen me work, or worse, have taken a class from me, know that I won’t use a pencil on a carving. But I will use chalk to rough out a pattern like this one.

There is no layout that I could discern on the original this is based on. I strike a centerline and margins. Then go in with some chalk, and block out three sections. These aren’t really thirds; the top tier is quite a bit shorter than the middle and bottom section. I just eyeballed this off the photo of the original. Then I use the gouges to start defining the curves and shapes, aiming generally for the chalked-in outline. But the gouges rule, the chalk is just a sketch.

I tend to tackle one side of the bottom section first, then work that same design on the other side of the center line. Then I move up a bit to define the large flower head at the top of the panel.

The scrolled volutes that flank the flower are another area that deserve concentration to get them “right”. Then you fill in the spaces between with leaves, etc.

Once the whole thing is outlined,

then I remove the background with a shallow gouge (a #5 in the Pfiel measuring system, for those of you who want specifics). This background need not be dead flat – in fact it shouldn’t be if you want your work to look like 17th-century carvings.

The nice thing about chalk versus the pencil is that removing the chalk lines just requires a slightly damp cloth to wipe them away. A few gouge-cut details decorate the main surface, usually I texture the background with a punch. Or you can paint the background too.

I think this one used 5 gouges for 99% of the design, then I picked up a very small gouge to finish some detail here & there. And a broad chisel for the outline, and chopping along the center stalk of the design.

Tool-selling is making me crazy. If you hi-hosied a tool, you will hear more from me early this week. I packed 20+ boxes today, with about that many more tomorrow. so hang in there.

Meanwhile, here I am, back to actual woodworking. I have made wooden hinges on many of my boxes over the years. I over-represent them based on 17th-century surviving examples, but people nowadays are drawn to the idea of a wooden hinge. 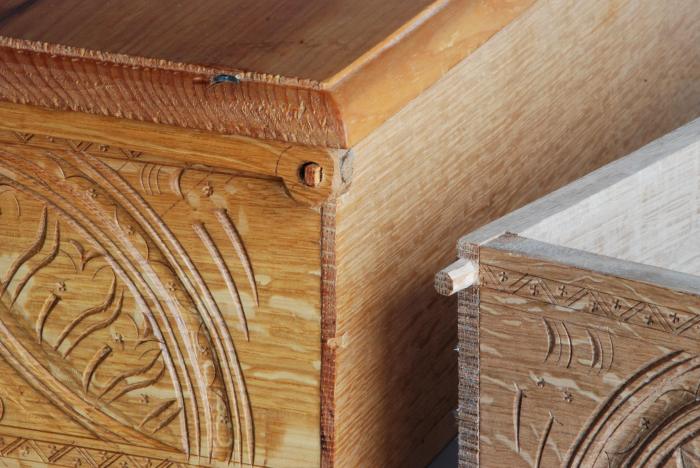 I have rarely used them on joined chests, but shot the process this week for the book I’m writing about chests. I might have mentioned them in the DVD but didn’t show one. So here goes.

They require a bit of fussing. First, you need to plane or shave a rounded edge on the top rear rail’s outside arris. This is to allow the lid to slide by when it’s opening & closing. You can use a plane, or a spokeshave. I worked with both tools the other day. I start with a bevel then continue to round it over by eye. There will be some adjustments made when you test-fit the lid. I just tilted the chest up on its front feet, and jammed it against the bench to get at it.

I have made cleats to fit the lid, with an enlarged end at the back. This will have room for the hole bored in it, in this case I made the hole 9/16”. To bore pilot holes in the cleat, I clamp it in the double screw, to lessen the risk of splitting the cleat.

Then, I set the whole shebang upside down on the bench. Set the chest on the lid, check the amount of overhang this way & that, then set the cleats in place & mark the lid for the nails that fasten the cleats.

Then I nail the cleats to the lid, but don’t clinch them yet. Set the lid in place, mark where the holes go in the stiles. bore these. 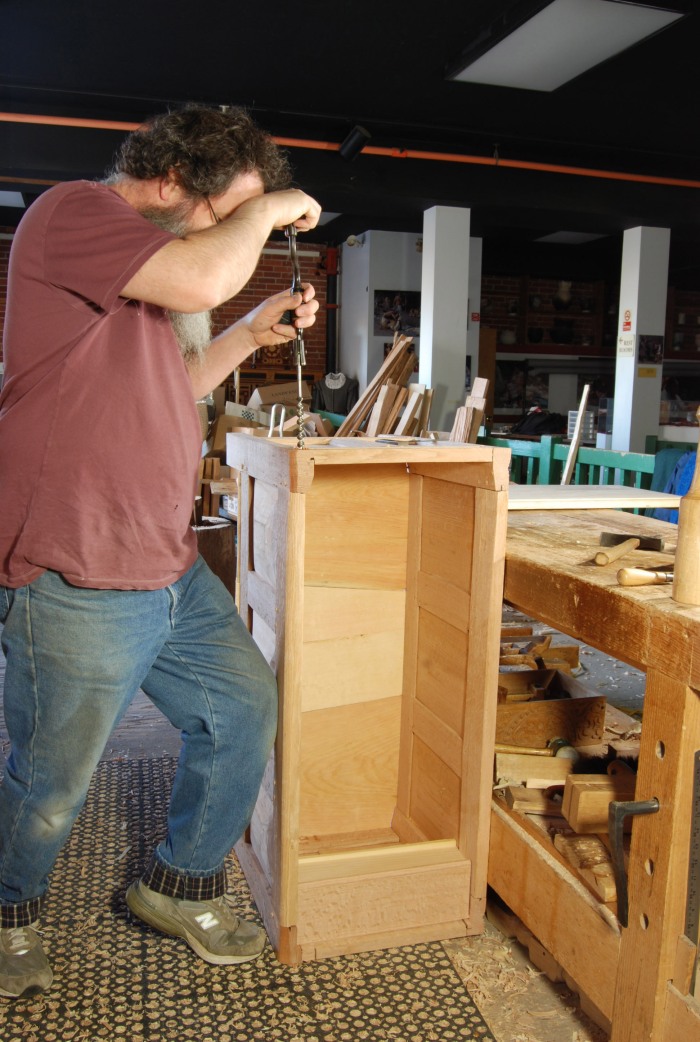 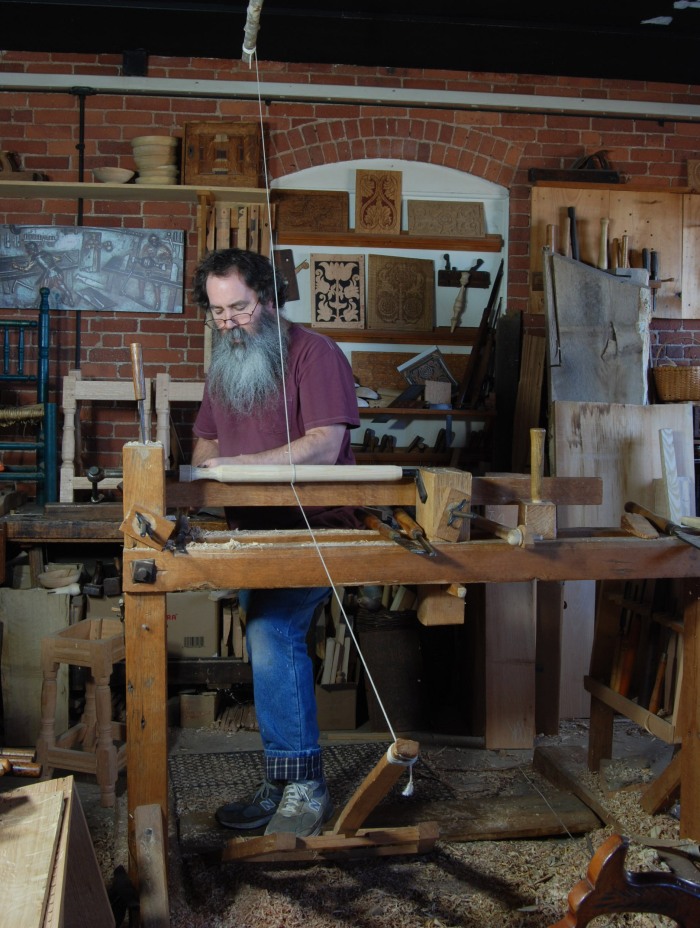 Here, I am testing the pintle end in the hole. It burnishes a mark that shows me where to shave with a knife to get the fit I need. I don’t want it so tight it splits the stile or the cleat.

Then a test-fit with the turned pintles in place. Try the lid. Watch for any rubbing of the lid on the rear rail. Fine-tune this, making clearance for the lid to swing by. On & off with the lid. It’s annoying, but if the lid binds anywhere on the rear rail, it will get ruined in time. It’s tempting to say “good enough” – but anything less than totally cleared is not good enough…it has to be right.

Once I was satisfied, I took the lid back off, clinched the nails, then put it back & glued the pintles into the rear stiles.

I have done some woodworking lately, just no time right now to write about it. some raking light to catch your eye….

I saw this out of the corner of my eye today, and thought, “birds’ eye maple need not apply”

I updated the tools, added a few that I ran out of time for the other night…. https://pfollansbee.wordpress.com/tools-for-sale-january/

WHAT? A Japanese saw on my blog? What’s going on?

The kids were having a hard time working with a backsaw when we made boxes a week or so back…then the next shipment of Alexander’s tools arrived (thanks, Trent) and in it was a few Japanese saws. I remembered that kids could handle these easily, and off we went. 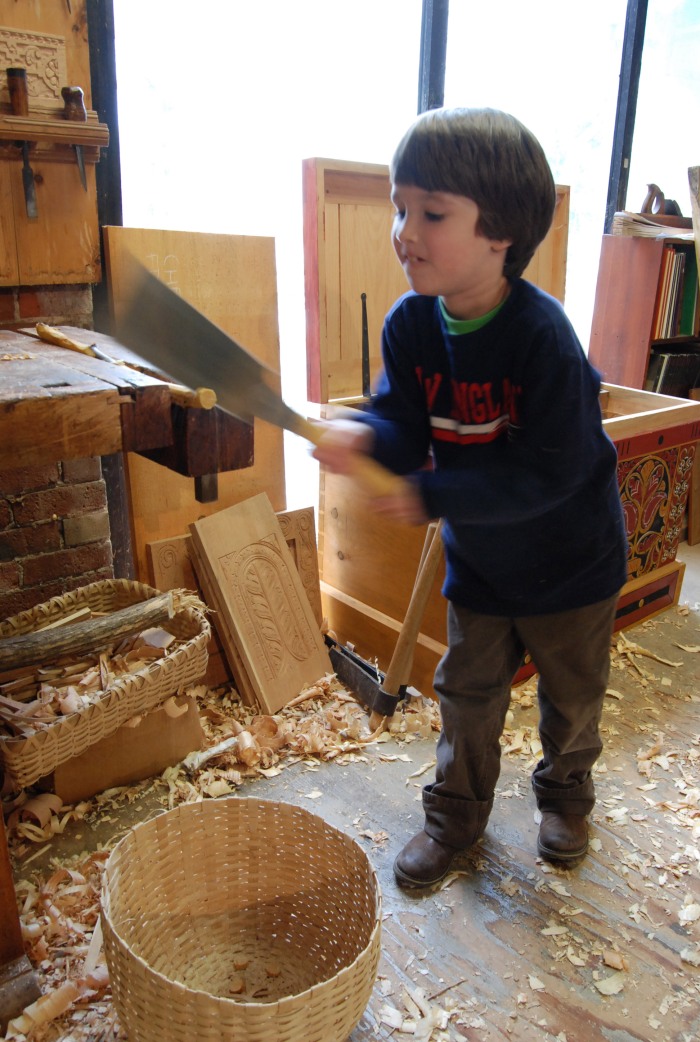 Rose is the most stylish sawyer I have run across…

I will get back to their project after the weekend. I have some leftover pictures from between the holidays, and have just got back to the shop regularly yesterday. So more to come. Tools for sale next week probably.

There’s a pair of redtail hawks that are usually found just down river each winter. Here’s one of the in the regular spot, perched up high over the river.

Found one of them being harassed by crows…flew right past us in the yard.

Here’s how we spent a good part of the past week- just as it should be. 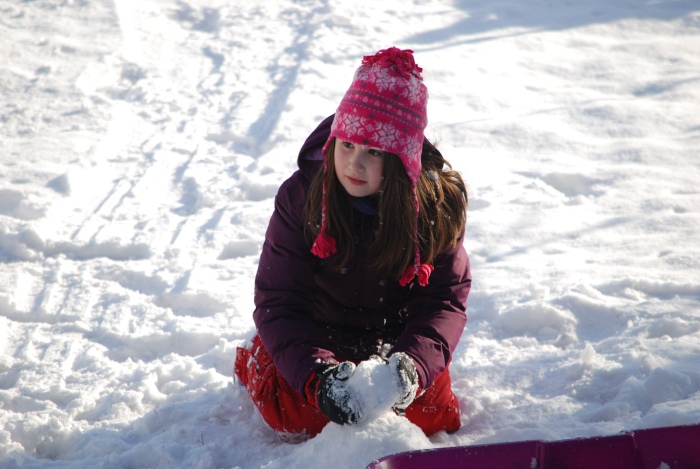 That, & chasing birds. One eagle sighting at work this week, but he got away. Some good views of an all-time favorite, cedar waxwings. 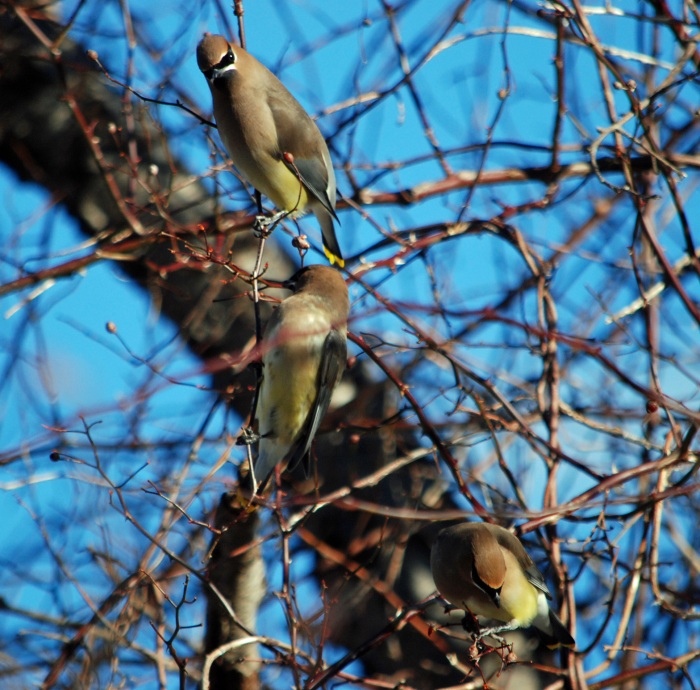 And today, two wrens scooting about in a pile of firewood. One is fanning his tail at some figured maple:

Join 2,792 other followers
I've been writing this blog since 2008. It is about a few things; my specialty in reproductions of 17th-century oak furniture, the use of hand woodworking tools, carving wooden spoons & bowls – and other pursuits involving hardwoods “riven” or split from a log. I first began learning these techniques in 1978. The blog tells the whole story, just not in any logical order. Delve in, search around. Lots to see here. Thanks - PF All material © Peter Follansbee, 2008-2020