I’m supposed to be putting together 3 lectures and planning 2 demonstrations. And finishing an article. And more. So I’m susceptible to distraction tonight. While looking for slides, I ran across these old notes I took about 15 years ago. Many years ago, I bought a few volumes of the Records of the Worshipful Company of Carpenters. An extravagant purchase, but with some great details about their goings-on. Here’s a snippet, I wrote a “translation” in parentheses for the many folks who might not be so nimble at deciphering the original:

payd to Rychard burdn for iij plankes for the bowlyng ale xviijd  (paid to Richard Burden for 3 planks for the bowling alley, 18 pence)

payd for iiij lode of funders yearthe & the caryag for the bowlyng ale vs vjd  (paid for 4 loads of founders earth and the carriage for the bowling alley, 5 shillings, 6 pence)

Randle Holme’s description of bowling, from 1688 is:

Bowling is a Game, or recreation which if moderately used very healthfull for the body, and would be much more commendable then it is, were it not for those swarms of Rooks, which so pester Bowling greens, where in three things are thrown away by such persons, besides the Bowls, viz: Tyme, Money, and Curses, and the last ten for one.
Seuerall places for Bowling.
First, Bowling greens, are open wide places made smooth and euen, these are generally palled or walled about.
Secondly, Bares, are open wide places on Mores or commons.
Thirdly, Bowling-alleys, are close places, set apart in made more for privett persons, than publick uses.
Fourthly, Table Bowling, this is, Tables of a good length in Halls or dineing roomes, on which for exercise and diuertisement gentlemen and their assosiates bowle with little round balls or bullets.

Here’s Jan Steen’s skittle players, not technically bowling. But what we in the US think of as bowling these days. 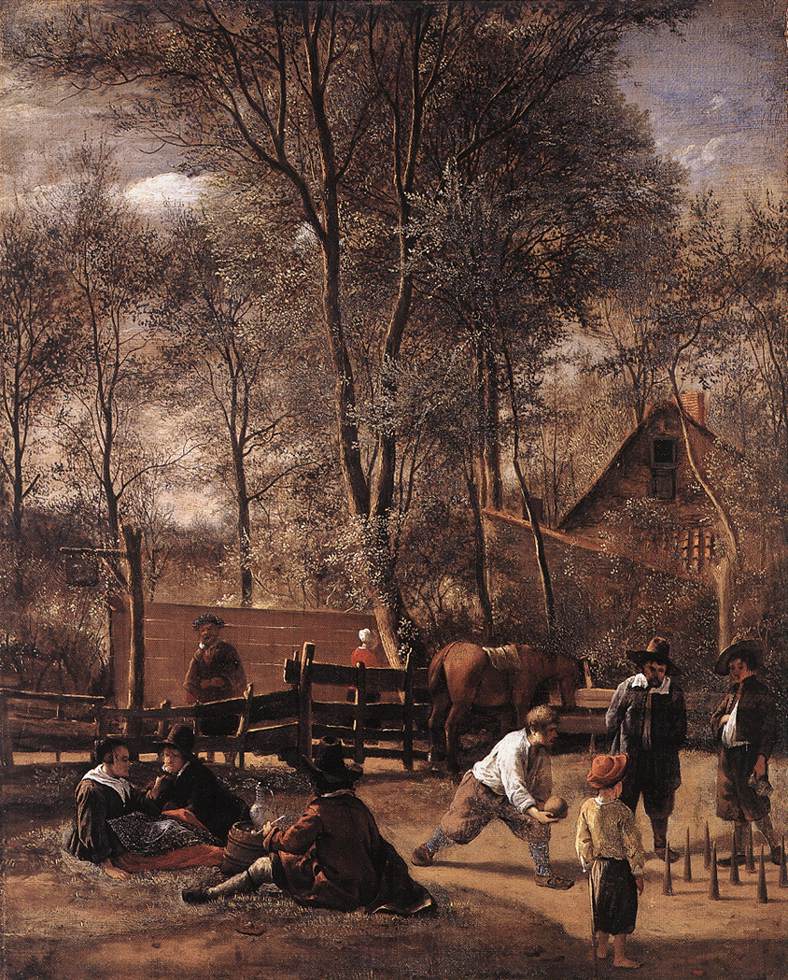 Several sorts of Bowles.
Where note in Bowling the chusing of the Bowls is the greatest cunning, for
Flat Bowles, are best for close Narrow alleys.
Round Byassed Bowles for open grounds of advantage.
Bowles as round as a ball for green swarths that are plain and Levell.
Chees-cake bowles, which are round and flat like cheeses.
Jack Bowles, little bowles cast forth to bowl att, of some termed a Block.
Studded Bowles, such as are sett full of pewter nayles, and are used to run at streight Markes.
Marvels, or round Ivory balls, used by gentlemen to play on long tables, or smooth board Romes.

I saw these bowlers during my trip to England a few years back. I think this was near Royal Leamington Spa

Read about it here: http://www.sec.state.ma.us/mhc/mhcarchexhibitsonline/crossstreetbacklot.htm

Began turning the pillars. 4 1/2” diameter, this one (of 2) is 13” long, the upper case pair are longer. I just rough it to shape at first, then let it dry some before final turning. the wood is cherry, it will be painted black in the cupboard. #polelathe #greenwoodworking #cupboard project #peterfollansbee
I can cut dovetails when I have to. And when I do, it’s the only time I lay a plane down on its side. Yesterday’s work today. I’ll fit this drawer tomorrow then on to turning & molding. #joinery #greenwoodworking #oakfurniture #mortise&tenon #cupboardproject
Back up on its (temporary) feet. Time to make the deep drawer. #joinery #greenwoodworking #oakfurniture #essexcountycupboard #mortise&tenon
Well, now to reverse the process. Back from my first workshop in the new world. @petergalbert @charlie.ryland and @thepunkrockshaker helped me through it. We had a blast…but now I have to put all this stuff away & build the cupboard. Which will also be a blast.