Skip to content
HomeI didn’t mean to do this…

I didn’t set out to make this at all. I only saw the original once, back in the early 1990s when I was researching the furniture made in 17th century Braintree, Massachusetts, by William Savell and his sons John & William.  But then recently I was given (thanks Michael) some really wide red oak bolts…so  I rived & planed up stuff & decided to tackle this form. (10″ high, 22″ wide, and about 16″ deep) I had built one once but I think it had no insides, I forget.

In the photo above, I have test-fitted the fixed top board, it will be trimmed after attaching it with wooden pins. It won’t get installed until the hinges are attached to it. First things first.

Many English boxes are just plain inside, but New England ones often (usually) have a till inside. The Savell shop had tills and drawers inside theirs, even their flat-top boxes like this one, I forget right now if there were drawers under the till nearest the camera:

It’s a particularly stupid arrangement – if you stuff things in the box, then you can’t pull the drawers out. But it has an obsessive compulsive appeal.

A desk/slant-lid box almost always is divided up inside. This one features two tills, a long open tray in the rear, and four drawers up above. One of the tills, closed – English oak for the till lid: 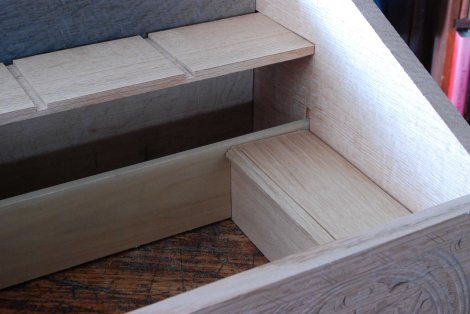 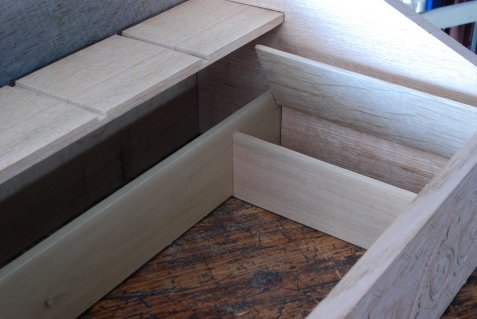 The original is missing its drawers, maybe they were cubbies w/o drawers –

but mine will have small oak drawers. I just ordered the dovetail hinges for it, and some curtain rings for the drawer pulls. When I get this far on a new project, I always wish I could make the 2nd one first – just made some trial & error sort of mistakes. Nothing major, but next time….

Now while I wait for the hardware from the blacksmith, I’ll plane up the board for the hinged lid, then I can go back to the joined chests I was making.