This isn’t the blog post I wanted to write tonight. A few readers emailed me with the news that Bill Coperthwaite died in a car accident in Maine on Tuesday. Icy road conditions, lost control of the van. Died at the scene.

So what am I thankful for this Thanksgiving? Simple –  having met Bill. About 10 years ago, the museum acted as training ground and consultants for a PBS program called Colonial House. I had little to do with it, other than making 4 housefuls of furniture. But my wife Maureen & I, along with several of our great friends and co-workers back then, were part of the clean-up crew. That meant we travelled to Machias,  ME and stayed out in this glorious seaside house, while we worked at the site dis-mantling the innards of several 17th-century style houses…in absolutely perfect New England early October weather as I recall. We liked it so much that several of us, in one configuration or another, rented the same house for a vacation for several years after that.

Here’s the view out the front door of that house:

When we were there the first time, I remembered one of the young members of our building crew telling us about a guy who lived around the cove in a few yurts. I thought, “that’s Coperthwaite.” I had never met Bill, but we had several mutual friends, foremost Drew & Louise Langsner. Look in Drew’s early book Country Woodcraft, and Bill wrote the introduction.

We had no time to chase down Bill’s place that first season, but the next year we had no work to do, so my friend Tom & I decided to try to find him. Catch was we had no boat, so had to figure out how to get there by land. It’s Maine – the place that invented “you can’t get there from here.” When we finally did get to Bill’s trail, and started walking in, out came Bill, en route to a workshop. He invited us to come help, but that was the day we were headed home (an 8 or 9 hour drive.)

Life got in my way & it took me several years before I was out that way again. After working with the folks at Lie-Nielsen a bunch, I decided to tack on a trip to Machiasport after one of my stints at LN. I got to spend a couple of afternoons with Bill, no where near enough time, but glad I made it happen. What an interesting person! It was fun to watch & listen as Bill never answered a question directly, everything became a teaching opportunity. 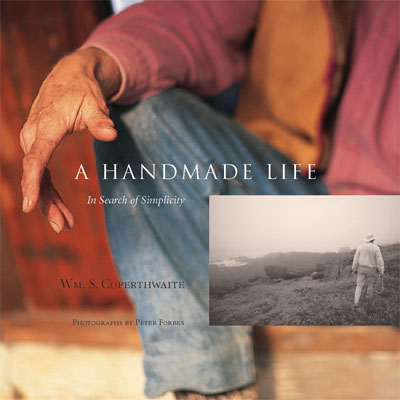 When people ask me, I always say that A Handmade Life is my favorite book…some can’t stand it, but I take what I need from it & leave the rest.

Best poem in it?

“Why not get some horses?”

Comes over the water,

From a 30-foot lobster boat

To my 20-foot canoe with

By rock-bound shore and gnarled spruce.

Osprey “float” above with sharp cries.

Waiting for the tide to drop.

If lucky – there may be otter kits

Playing in the shallows

At the tide rips.

An eagle perches on a snag,

Loon laughter lilts over the bay,

A seal looks me over.

A motor would take half the time –

But, what with mounting it,

Feeding it, and keeping it in tune,

Would there really be a gain in time?

True – I could go when the wind is

Too strong to paddle

But that is a non-problem.

The racket, the stench, the poisons –

There is the problem.

Oh – I could still see (most of) the birds

But not hear them

And the otters – they’d be gone.

Carved on a beach in the San Juans,

Has served me well these thirty years.

While paddling the brain does delightful things,

Each moment a surprise – a treasure.

Motoring puts all that on hold,

My brain turned off:

Join 2,795 other followers
I've been writing this blog since 2008. It is about a few things; my specialty in reproductions of 17th-century oak furniture, the use of hand woodworking tools, carving wooden spoons & bowls – and other pursuits involving hardwoods “riven” or split from a log. I first began learning these techniques in 1978. The blog tells the whole story, just not in any logical order. Delve in, search around. Lots to see here. Thanks - PF All material © Peter Follansbee, 2008-2020